Volterra, a medieval hilltown in a middle of Tuscany, has been home to the University of Detroit Mercy School of Architecture (SOA) summer study abroad program since 1987. The long term relationship between the school and the city inspired the creation of the Volterra-Detroit Foundation, a non-profit organization which facilitates the UDM SOA programs in Volterra. It also resulted in the opening of the Volterra International Residential College, which since 2013 has been the home of the SOA program in Italy. 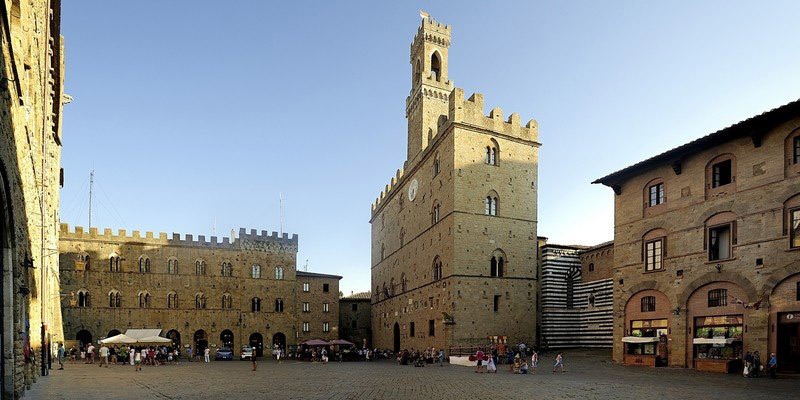 The first Volterra International Design Workshop was organized jointly by the UDM SOA and the Volterra-Detroit Foundation on July 29 – August 8, 2015. In addition to the host team from UDM SOA, students and faculty from three other academic institutions participated in the workshop: University of Illinois at Urbana–Champaign (USA), Warsaw University of Technology (Poland), and University of Pisa (Italy). Architect James Timberlake from Kieran Timberlake (Philadelphia USA) attended as a special guest of the workshop to provide the intellectual leadership and connect the students with the most progressive ideas in the architectural profession.

Looking down from the medieval wall on the ruins of the Roman Theater (I century BC) and the project site. Photo credit: Wladek Fuchs

The theme of the workshop was “Society and Technology: Water, Food, Waste, and Energy”. The workshop consisted of three interwoven components: pre-workshop research, a lecture series, and a design challenge.

The focus of the school teams’ pre-workshop research was on their universities’ hometowns. Following the general theme of the workshop, the students studied the relationship between and mutual impact of the availability and distribution of fundamental resources (energy, water, food) and city development. All school teams presented their research during the workshop.

The lecture series was designed to give students insight into the history and the contemporary problems of Volterra, as well as to present a modern vision of architectural research and practice.

Beyond the general introduction and the historical tour of the city, the Volterra theme was continued in presentations made by the Director of the Pinacoteca in Volterra, archeologist Alessandro Furiesi (on water management in Volterra from antiquity to modern times), architect Andrea Bianchi (on the deterioration of the Tuscan landscape caused by the industrial use of land in Volterra territory) and the president of the social cooperative “La Torre” in Volterra Marco Bruchi (on the problems of garbage removal and recycling in the Comune of Volterra).

A connection between the context and the goal of the workshop was provided in lectures by Dean Will Wittig and Professor Wladek Fuchs (University of Detroit Mercy School of Architecture). Finally, James Timberlake gave two highly inspiring talks about “Making of an Architect”, as well as his firm’s design and research philosophy and most recent projects. 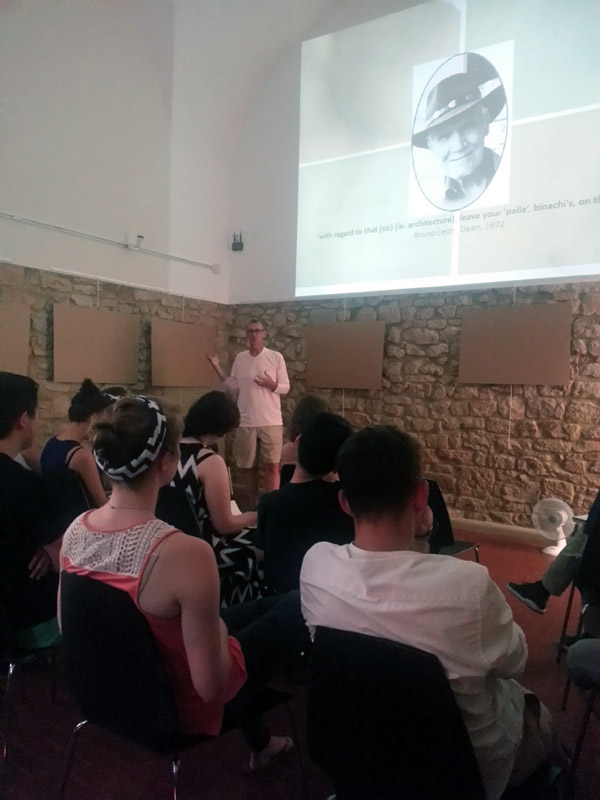 James Timberlake talking about “making of an Architect” – remembering Bruno Leon, the first Dean of the University of Detroit (Mercy) School of Architecture

At the core of the workshop was the unique opportunity for everybody to collaborate over an architectural design problem. The city of Volterra is a wonderful urban laboratory, presenting a great balance of the medieval city scale, form and tradition, contrasted with problems resulting from the needs of a living city organism. The site selected for the design challenge lies just outside of the city’s medieval walls, alongside the ruins of the Roman Theater, and it is bordered by one of the main streets bypassing the historic center. Currently used as a municipal parking lot, the site presents great potential for a much more significant role in the city’s urban fabric. The functional program of the project was branded as an “Ecological Forum”, a city district focused on the ecological values of urban living, and complementing the historical urban core of Volterra. The needs of the pedestrian and vehicular traffic in the area, as well as residents’ and tourists’ car parking on the site were also a significant part of the functional program. 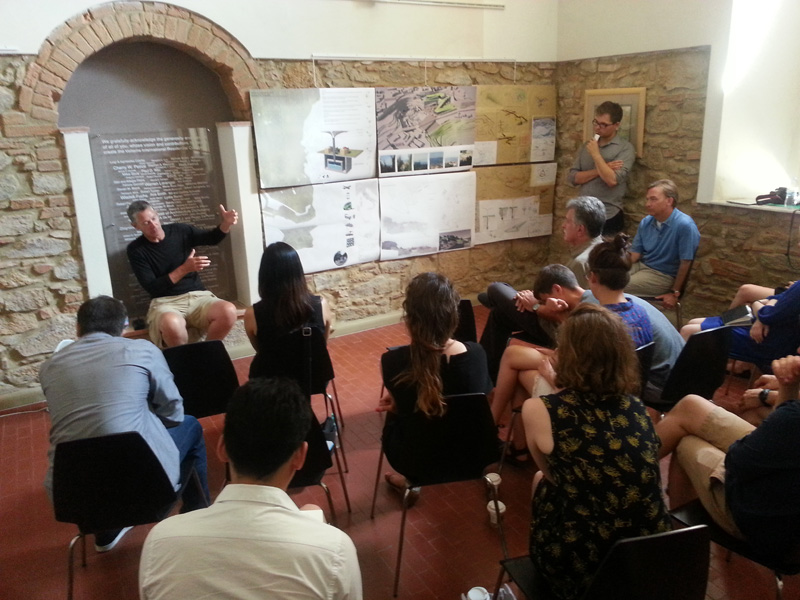 Final discussion of the projects

The workshop concluded with project presentations, a discussion, and a public exhibition at the Volterra International Residential College. The projects generated a significant amount of interest and discussion among the city officials and residents who came to the exhibition. The site and its current use is a matter of significant public interest in Volterra, as part of the greater problem of the vehicular traffic and private car parking in the city. The work presented at the exhibition has been clearly seen as a valuable voice in the discussion about potential directions for future development. 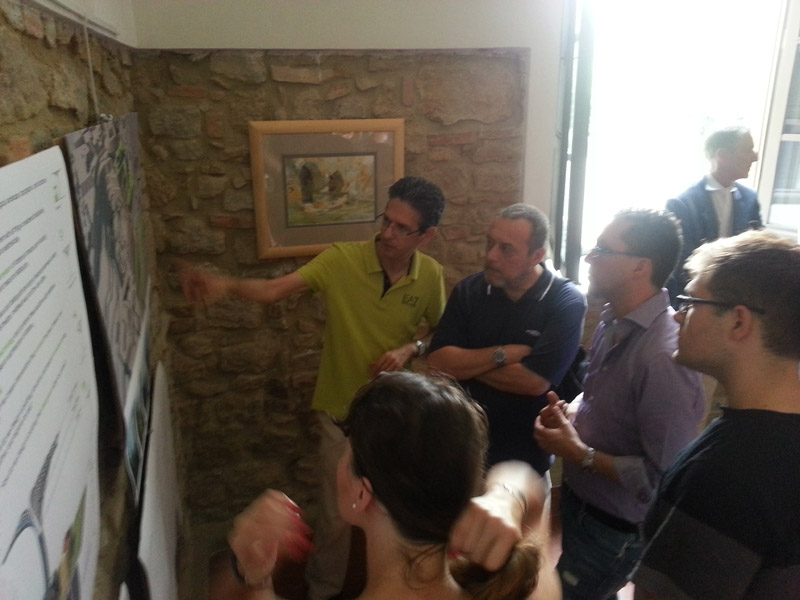 The city officials and residents discussing the projects during the exhibition.

Two primary notions permeated the final presentations and discussion among the workshop participants. The first was the importance of research in design, and the value of design as a form of research. Research changes attitude towards design, and design challenges in turn establish the need and direction for research. The design outcome of the workshop has clearly identified a direction for further studies on the scale of the entire city. This will involve the vehicular traffic pattern inside and around the city, and the potential for a green belt around the medieval center of Volterra – instead of the existing chain of parking lots. Thus the design ideas formulated this year have become the first step in research toward next year’s workshop.

The second of the most valuable qualities of the workshop was the teamwork and collaboration the students engaged in. Over the course of the six days of the design work, the students had the opportunity to share and confront their ideas and skills in the continuous dialogue with their colleagues and faculty mentors. Considering the nature and the character of the contemporary architectural practice, collaborative design work should be considered an essential part of professional education, After all, in an architectural office environment, the most important quality, and one which can be built only through a genuine and continuous collaboration is – in the words of James Timberlake – “the collective intelligence”.