Samuel James Ainsley (1820-1874) was a British artist recognized especially for his drawings and watercolors of Italy.
There are several drawings made on the artist’s third Tour of Etruria, April-July, 1843 in the British Museum collection in London. S.J Ainsley traveled with his friend, George Dennis, who later wrote the book “Cities and Cemeteries of Etruria” Vol. I and II. A large portion of Volume II is dedicated to Volterra. 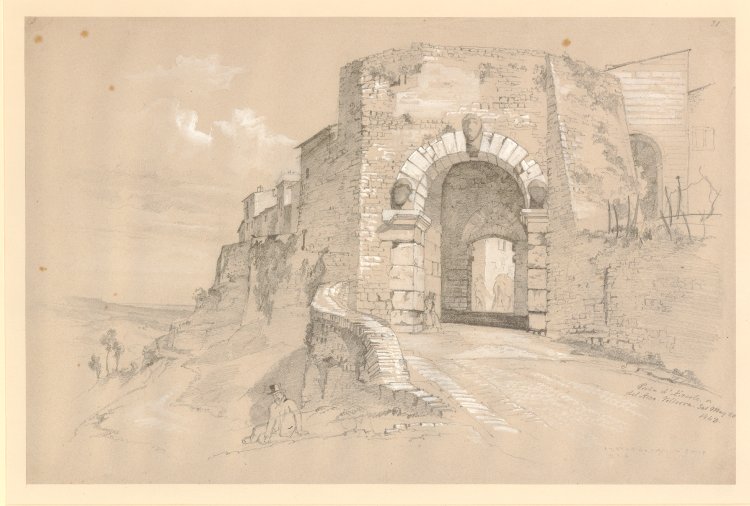 Porta all’Arco, Volterra; a road from the foreground right enters the town by the gate, at left a valley and town walls. 1843 Graphite, heightened with white; on grey paper.

George Dennis wrote very beautifully about the Porta all’Arco in his book: “I envy the stranger his first impressions on approaching this gateway. The loftiness of the arch; the boldness of its span; the massiveness of the blocks, dwarfing into insignificance the medieval masonry by which it is surrounded; the venerable, yet solid air of the whole; and more than all, the dark, featureless, mysterious heads around it, stretching forward as if eager to proclaim the tale of bygone races and events; even its site on the very verge of the steep, with a glorious map of valley, river, plain, mountain, sea, headland, and island, unrolled beneath; make it one of the most imposing yet singular portals conceivable, and fix it indelibly on his memory.” (George Dennis, “Cities and Cemeteries of Etruria, Volume II”, page 143) 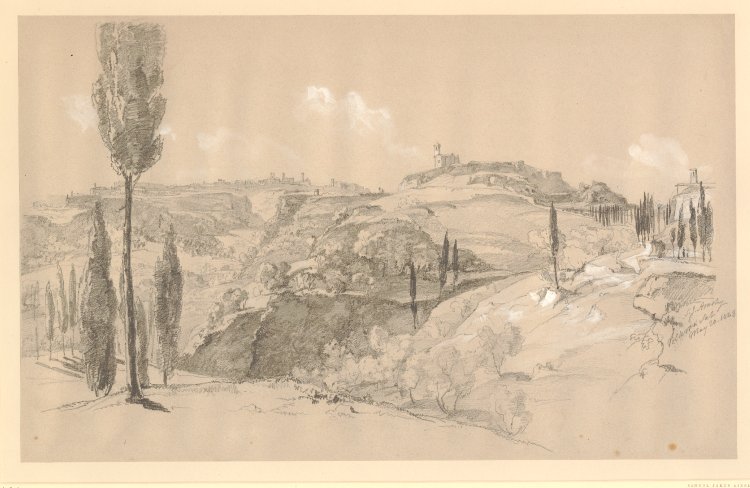 View of Volterra; the town is seen at some distance on hills across a wooded valley, cypress trees on the slopes near the foreground. 1843 Graphite, heightened with white; on grey paper.

Once again, using the words of George Dennis: “From whatever side Volterra may be approached it is a most commanding object, crowning the summit of a lofty, steep, and sternly naked height, not wholly isolated, yet independent of the neighboring hills, reducing them by its towering supereminence to mere satellites; so lofty as to be conspicuous from many a league distant, and so steep that when the traveler has at length reached its foot, he finds that the fatigue he imagined had well-nigh terminated, is then but about to begin. Strabo has accurately described it when he said ‘it is built on a lofty height, rising from a deep valley and precipitous on every side, on whose level summit stand the fortifications of the city. From base to summit the ascent is fifteen stadia long, and it is steep and difficult throughout.’” (George Dennis, “Cities and Cemeteries of Etruria, Volume II”, page 137) 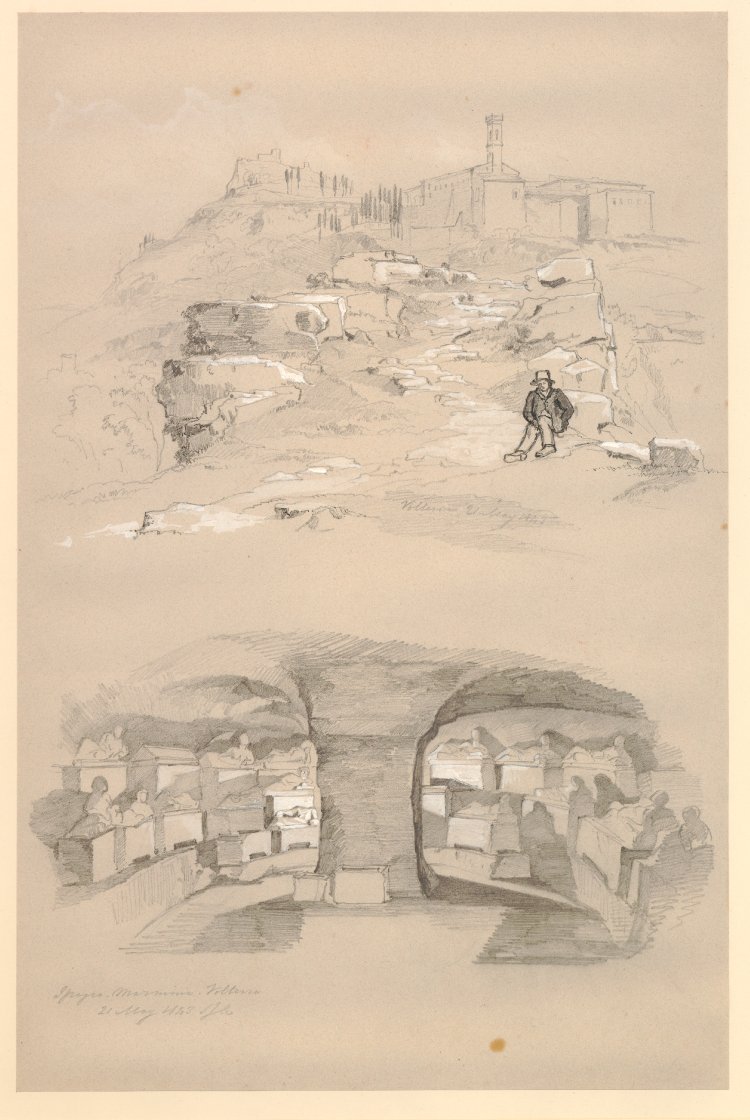 Two sketches at Volterra: (a) Le Balze di San Giusto and the Grotta de’Marmini; a road built with blocks of ancient masonry along a precipitous ridge, ascends to a hamlet with church. 1843 Graphite, heightened with white, touched with pen and black ink; on grey paper (b) The Grotta de’Marmini; a circular chamber in the rock, supported by a pillar and surrounded with reclining figures on sarcophagi. 1843 Graphite, heightened with white.

Link to S.J. Ainsley drawings of Volterra in the collection of British Museum