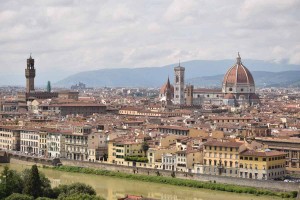 Something I have found to really enjoy, more and more as I travel from place to place, is finding the city within the city. But what do I mean by this? I mean that I want to enjoy the experience of a city beyond the few things that the world knows that the city has to offer. You know, like Pisa and the Leaning Tower, or Siena and her cathedral, Florence and David. I want the experience beyond these few things that everyone knows. I want to walk through the neighborhoods and streets that tourists don’t dare to walk down. I want to eat at the restaurants that only offer a menu in the native language. By no means am I saying that you should not see the Leaning Tower or David, trust me they are way better in person than in our history books! What I am saying though, is to look beyond what our guidebooks say, stay an extra few nights and explore where your mind wonders as you begin walking down a street. Remember, there is nothing wrong with buying a cheap bottle of wine and finding a hill or piazza to watch the sun set and read that guidebook!

Last weekend our Social History of Art and Architecture in Italy class took a trip to Florence. We visited many stunningly significant pieces of art and architecture, including; Brunelleschi’s dome, Michaelangelo’s David, and the Bargello. After the trip a few of us decided to stay behind and explore a little more of the city, we allowed our minds to lead us to some of the greatest and most wonderful things I have ever seen! I can honestly say that I fell in lust with the city of Florence. 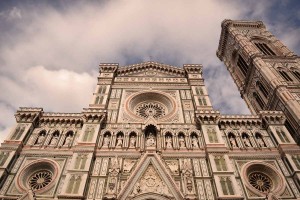 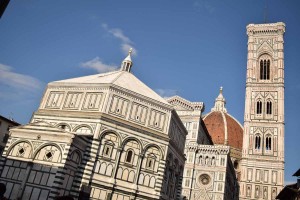 How amazing is this view?!

So let’s start with the Cathedral and its surrounding context. The Cattedrale di Santa Maria del Fiore (in English Cathedral of Saint Mary of the flowers) is located in the center of the Piazza del Duomo with Brunelleschi’s dome placed perfectly on top of it’s decorated facade, Ghiberti’s Bronze doors across the way on the Baptistery of St. John, and Giotto’s Campanile next door. The Piazza del Duomo is the most perfect set of complementing and contrasting architectural features that I could ever ask for. I can honestly say that the I couldn’t move when I came across the Piazza and saw these elements soaring above me with their vast size compared to my 5’2” self, the green, white, and red marble facades gleaming in the light with a bright blue backdrop of the sky, and the campanile’s bells chiming and ringing as if they were welcoming me into this holy place of worship. 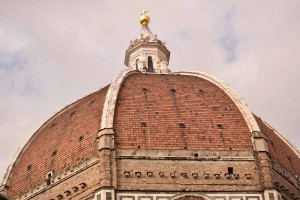 On August 19, 1418 the Opera del Duomo announced a competition concerning Florence’s new Cathedral, Santa Maria del Fiore: “Whoever desires to make any model or design for the vaulting of the main Dome….shall do so before the end of the month of September… he shall be entitled to a payment of 200 gold Florins.” The cathedral, originally designed by designed by Arnolfo di Cambioin 1294 included a dome that no once could figure out how to build. The drawing stated its width and height wider and higher than any existing dome at the time, and built without any buttresses to help support the dome. Brunelleschi won the announced competition and work started on the dome in 1420 and was completed in 1436. Brunelleschi studied Romes Pantheon for a solution to the technical problems of creating a dome that with taller and wider than any existing domes. His solution was to create a set of four internal stone and iron chains that would serve at barrel hoops to counter hoop stress in the dome. Today Brunelleschi’s dome protrudes from Florence’s skyline, it is what people come from all over the world to see. But, for me I couldn’t get over the facade, dedicated to the Mother of Christ, and the other exterior walls decorated in the red, white, and green marble. It was like a huge mosaic swallowing this huge piece of architecture, I loved it, I couldn’t move, I just wanted to stand there and eat gelato and prosciutto and take pretty pictures all day! 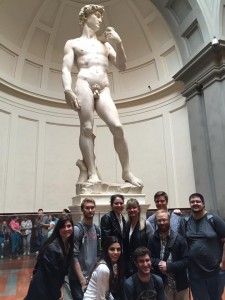 the class and our new friend David!

Another highlight while on this class trip to Florence was seeing Michaelangelo’s David and his unfinished slaves. Michaelangelo started working on David in 1501 and finished in 1504. Believe it or not he was not supposed to be in the Academia and behind glass!!! He was actually supposed to be placed on one of the pedestals near the cupola of the Duomo! If you look at his proportions in his body, like his hands and head you can see that he is kind of funny looking, this is because he was supposed to be standing a total of 80 meters above us. If you crouch down to the floor, his body seems to morph into what seems to be a perfect body form. Michaelangelo crafts David in way that we do not see so often for our character who defeats the Goliath. Typically we see David depicted victorious after combat. Here, we see David tense and preparing for combat, as if he has just decided to fight the Goliath. His contrapposto pose, standing with most of his weight on one foot and with their body twisting outward from the hips and legs, creating an image that is dynamic and moving.

We also had the change to meet a few of Michaelangelo’s slaves. There were supposed to be a total of over 40 completed figures representing slaves, prisoners, or captives.  At the Academia leading our eyes to David in the center we find a total of four unfinished slaves, two more stand in the Louvre Museum in Paris. We find these sculptures so interesting and wonderful because it gives us, the viewer, an opportunity to see how Michaelangelo worked. As if he was revealing or releasing the figures trapped or contained within the marble he worked with. We can clearly see the mallet and chisel marks moving from larger gashes into smaller and finer details. 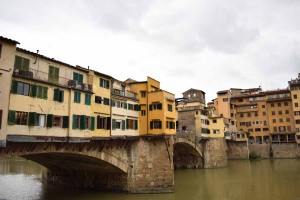 After braking off from the rest of the class, Evon, Jacob and I explored beyond the train station towards the Arno River. Here we are able to take some time away from the hustling and bustling life of the city. The river was calm, there were people kayaking and rowing up and down the stream, the view was amazing. We then grabbed a few quick panini and walked to the other side of the Arno to allow the amazing view to swallow us up as we walked through the cafes, boutiques, and parks that made up the streets of Florence. We crossed the Ponte Vecchio bridge that is said to have not been destroyed in WWII because Hitler himself said it was too beautiful to destroy. We were trying to find our way to Piazza Michaelangelo and ended up taking a long-cut., something I found us to be very good at doing.  But, it was totally worth the hour-ish long walk! On our way to see the bronze cast of David at Piazza Michaelangelo we happened upon a set of stairs, at the top of this set of stairs I saw a church with the same sort of Florence/ Tuscan style details on the exterior walls. It was stunning and the view was one I will never forget, looking out to Santa Maria Del Fiore and Brunelleschi’s Dome and behind me a church that was the cathedral on a smaller scal, I was in Heaven. I was almost half expecting the inside of this church to be like Santa Maria, not very ornate and a kind of pure. As I walked into this church I was excitedly surprised to see a something just as complex as the exterior of the church and a story that made me smile. The church was decorated in the same Florence/Tuscan style that Santa Maria was but not just on the outside but also on the inside!!! The floor, walls and the ceiling were decorated in a beautiful craft that so many no longer know.  As we walked more into the church we notice that the floor plan and section are just as complex as the decoration it’s self, it was also like a beautiful mosaic, a layering of different elements one on top of another. The nave was traditional to the basilica type church and the alters were split to two levels, a crypt alter and a high alter. 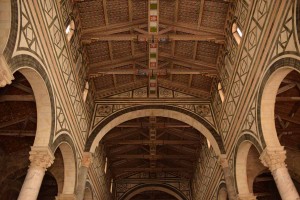 The church is dedicated to an Armenian Saint named St. Miniato (Which I thought was so funny because I’m Armenian!) So the story of Abbazia de San Miniato al Monte goes like this: Saint Miniato was an Armenian Prince serving the Roman army. He was denounced as a Christian after deciding to become a hermit. Miniato was thrown to the beasts in the amphitheater where a panther was called upon him by the emperor at the time. The panther refused to devour him, so the emperor ordered a beheading. Of course his head came off of his body. The story states that he picked up his head, crossed the Arno, walked up the Mons Fiorentinus hill and became a hermit in peace. A shrine was then erected in this place and later a chapel was built in the 9th century. 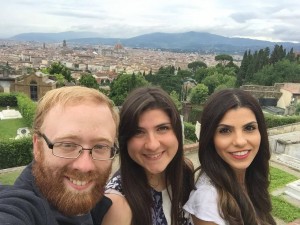 All in all the city of Florence was an absolutely amazing experience. I wish more people could see the side of Florence I saw, but part of me want to keep it a hidden little gem, tucked away in this large city. 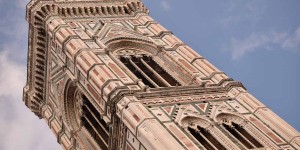 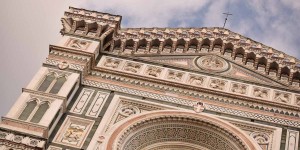 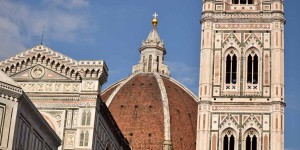 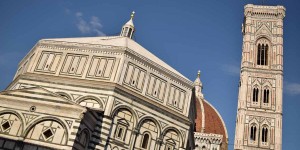 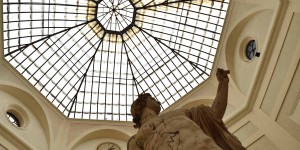 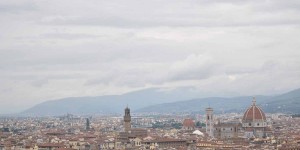 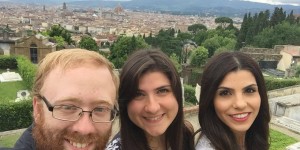 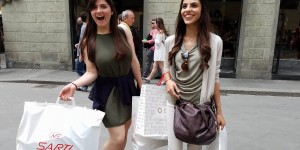 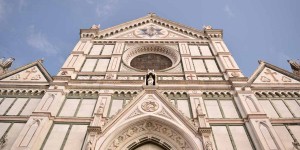 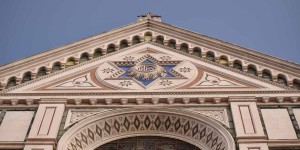 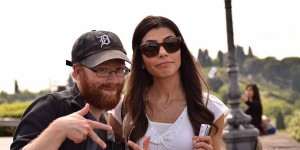