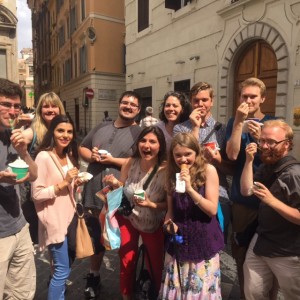 Enjoying some gelato in Rome

Last but not least, the last of our planned trips took us to the City of Rome.  The city known for its broken ruins and Baroque architecture.  I have to say now, that every one of our trips has been a blast, if you couldn’t tell from the blog. Something great about attending a school like UDM is that we have such a great opportunity to really get to know each and everyone of our professors. This is especially true with a study abroad group that consists of only 7 student and two professors! Learning in our Social History of Art and Architecture class never really felt like learning, it felt like fun and Italy became our playground!

We started our trip out with a walking tour of Rome and many educational pit-stops. We visited sites such as the Lateran Basilica, the Colosseum, the Pantheon, and St. Peter’s Basilica, and many other places as we wondered through the wonderful city. 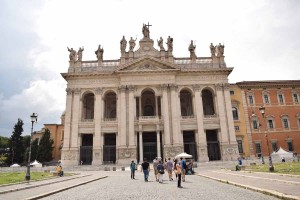 The Papal Archbasilica of St. John in Lateran

Our first stop was a place called the Papal Archbasilica of St. John in Lateran. This is actually the cathedral church of Rome and therefore is the ecclesiastical seat of the Roman Pope. I actually did not know this, I always thought that St. Peter’s Basilica was the seat of the Pope. The Latin inscription on the facade reads: Clemens XII Pont Max Anno V Christo Salvatori In Hon SS Ioan Bapt et Evang; and translates to: Pope Clement XII, in the fifth year, dedicated this building to Christ the Savior, in honor of Saints John the Baptist and John the Evangelist”. The basilica was originally consecrated in 324 CE, in the 890’s it was almost completely destroyed by an earthquake, it as rebuilt and stood on the site for 400 years when it was burned in 1308, the basilica was rebuilt again and burned in a second fire in 1360, and was rebuilt once more, and in 1735 the current projecting baroque facade is added to the older front creating a vestibule. The Basilica was absolute spectacular because it also acted as a reliquary for the older churches. Along the aisles for example we can see protected frescoes from one of the earlier buildings on the site. This site was an extremely wonderful place to visit for myself because of my faith. 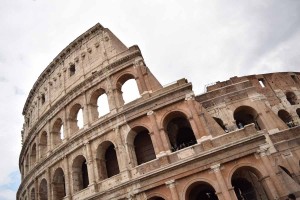 Next stop, the Colosseum

Next stop, the Colosseum also known as the Flavian Amphitheater. One of the most famous Roman ruins can be found in a low valley between the Caelian, Esquiline, and Palatine Hills. The Colosseum unlike earlier Greek theaters, that are built into hill sides, is an entirely free standing structure. The basic interior and exterior architecture form of two, fee standing, Roman theaters facing each other. The Colosseum is elliptical in plan and spans total of 615 ft long and 510 feet wide with a height of 157 feet. Construction started under the emperor Vespasian in 72 and finished in 80 AD by his successor Titus. The Colosseum is recognizable not only because of it’s massive size but also because of it’s stunning superimposed arcades framed my half columns that run around the elliptical plan. If we look closely at the Colosseum we can notice two things to talk about both relating closely to the arcade. Take a look at the columns, do you notice anything funny about them? In Greek antiquity Columns are used as a form of support. When the Romans came around they basically said that they were going to copy the Greeks, but make it better. The did this by reducing all of the Greeks engineering to strictly ornament. So, if you look closely at the columns on the Colosseum you can notice that they are only half columns, strictly ornament. If you look even closer at the columns we can notice that each story has a different order of columns. This is called a progression of orders. The first level is decorated in a Tuscan order, a form of the Doric Order. The second level is decorated in a and Ionic order and the third level in a corinthian level. 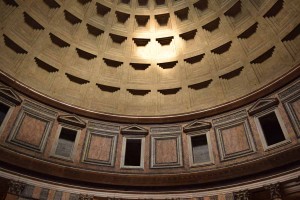 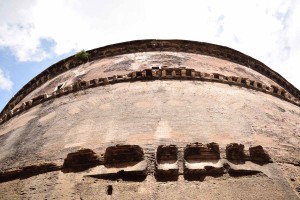 We then Visited the Pantheon, one of the most amazing pieces of architecture in the world. The Pantheon was originally built in 118-128 AD, commissioned Marcus Agrippa, is not what we see today. The building we see today was built during the reign of Emperor Hadrian, for some reason Hadrian did not give credit for his work to himself, he decided to keep the original inscription stating “Agrippa made this” on the portico of the building, this has caused some confusion about the date of the existing structures construction. The hight to the oculus at the top and the diameter of the inner circle are the same, 142 feet, meaning that we could fit a sphere with a diameter of 142 feet inside of the Pantheon perfectly! This piece is so absolutely amazing because it is one of the best preserved all Ancient Roman buildings and after almost 2 thousand years is still the worlds largest unreinforced concrete dome! The building is so well preserved largely because it has been in continuous use through out the years. The Pantheon, originally used as a temple to all gods, Pantheon literally meaning “of, relating to, or common to all the gods”, In 609 Ad the building was given to Pope Boniface IV, who converted the temple into a Christian Church dedicated to Santa Maria ad Martyres and in the Renaissance period the Pantheon began being used as a tomb, the buried include painters Raphael and Carracci, composer Corelli, architect Peruzzi, as well as Kings Vittorio Emanuele II, Umberto I, and Queen Margherita. 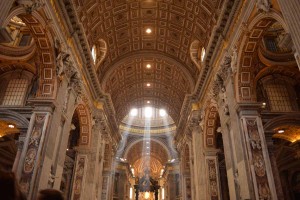 The Basilica of St. Peter 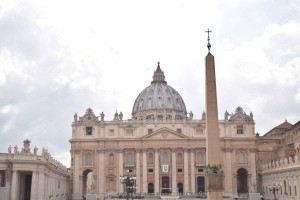 The Basilica of St. Peter

And last but not least we went to The Basilica of St. Peter. This again, like the Lateran Basilica was a wonderful spiritual experience for me. Though it is not the mother church of the Catholic Church or the cathedral of the Diocese of Rome, the Lateran Basilica is, St. Peter’s Basilica is still regraded as one of the holiest Catholic shrines in the world. The Basilica was originally built in the 4th century, but old St. Peter’s fell into disrepair and was rebuilt in 1506, completed in 1626. It sits on the site of St. Peter’s, one of Christs Apostles and the first Pope, burial site. In fact, the high alter of the Basilica is positioned directly above the tomb of Saint Peter. Traditionally the nave of a church faces the East/West direction , this is because it is said that Jesus will return in an easterly direction and is mentioned multiple other times in the Bible as being an important direction. But, to be able to design and build the Basilica with the high alter directly above the Saints tomb the nave could not face East/West but in a North/South direction. Above the alter and beneath the dome is a bronze structure created by Bernini. We don’t know if this is true or not but, it is said that the bronze for the structure was taken from the roof of the Pantheon. The structure is called a Baldacchino, it is a sculpted canopy intended to mark the place of Saint Peter’s tomb and the high alter of the basilica. 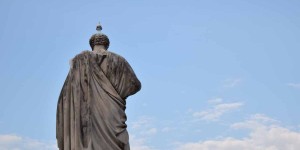 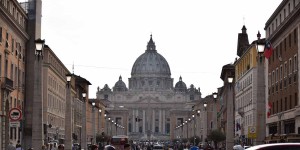 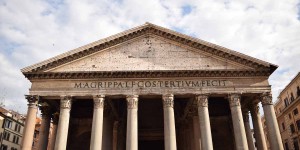 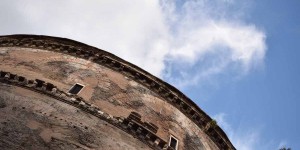 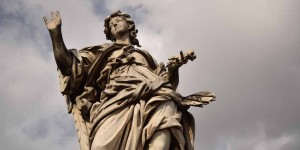 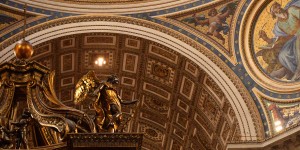 We also took a day trip out to Ostia Antiquia, I’ll save that for another blog post, coming soon.