Rome is the kind of city where you can walk in any direction and find political centers, significant contemporary culture, and as much history as you could desire. We were lucky enough to spend three nights in Rome, arriving on a Friday. After spending a hot day in trains and buses, we spent a few hours in our hotel or out in the Trastevere area south-west of the Tiber. We re-convened at the Vatican later that evening, taking in St. Peter’s Basilica before moving to the Vatican museum. The Vatican museum is a collection containing some of the most beautiful paintings and artwork by everyone form Michelangelo and Rafael to Salvador Dali and Henri Matisse. The most striking part of the museum for a group of architecture students was the breathtaking Sistine Chapel, adorned beautifully with the legendary ceiling painted by Michelangelo. 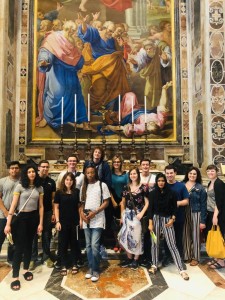 On Saturday (another hot day), we took to the streets of Rome to meet under The Arch of Constantine before heading into the iconic Flavian Amphitheater. After a couple hours of sun, heat, and three-dozen people trying to sell us selfie sticks, it was nice to get into the cover of the ancient colosseum. It was a surreal experience to be in the middle of a space we had all learned about and seen our entire lives. You can study something as much as possible but you can’t really understand the power of the space unless you spend time within it and really consider the way it must have felt to be there during the extravagant games and events held for the Roman public. After an evening walk through Palatine Hill, the group split up in search of carbonara, drinks, and foosball.

The stunning arena of the colosseum.

Sunday we woke early to make our way to the ancient Roman city of Ostia, an incredibly well-preserved example of Roman urban planning and architecture. We walked for hours through the streets, houses, temples, theaters, and lives of Roman citizens. It was like the experience of the examples of Roman culture we had seen the day before but with the intimacy necessary to really relax and think. The significantly less amount of people and the freedom to walk where you chose made it possible to really have discussions about the intricacies of Roman architecture and really see first-hand how it has been impactful. Form Ostia we split up, with some enjoying the beautiful day at the beach, and others heading to central Rome. We all met at the Pantheon after a few hours and experienced one of the legendary dome and oculus, before heading to Giolitti for some of the best gelato that Rome (dare I say, the world) has to offer.

Monday we met in the morning to make our way to the church of San Carlino, a beautiful example of baroque design in the heart of Rome with a truly unique feeling and an abundance of beautiful ornamentation. Our own Aya told us all about the mathematical ideas behind the amazing space, and we were able to go below the church as well as into the cloister before leaving. After this we split up and enjoyed our last few hours in Rome observing more architecture, art, and a lot more gelato.

The Tiber River at night.