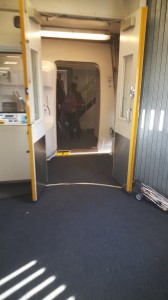 Entering the Plane to Paris

During this post I would like to explain to you all how much fun Samantha (Architecture Student Studying Abroad) and I had getting to Europe/Volterra. First off, we were flying Delta Airlines and had flight scheduled for 6:00 PM from Detroit – Paris -Florence. The Initial flight from Detroit to Paris was straightforward with zero complications. Once Samantha and I landed in Paris is where all the “fun” began. Aside from not knowing where we were, we could not understand anything! The language barrier became a huge issue in such a massive airport. On top of the language barrier, our plane ticket did not list a Terminal or Gate # to which we were to board our next flight. Knowing these issues, Sam and I played everything by ear and followed the crowd. Eventually, we had ended up at Gate F47 by following people who were on the previous flight with us. Without hesitation, we boarded the plane hoping that Florence we would have a much easier time navigating through Florence, we have never been so wrong. Upon getting to Florence we had discovered that they had lost Sam’s luggage, which had majority of her clothes and other items needed for the study abroad program (studio supplies etc.) After this we had missed our bus to the train station “Santa Maria Novella” where we would be traveling to Pontedera. We boarded a bus and eventually made our way to Santa Maria Novella and bought two tickets to Pontedera, This was not an issue, the issue came as there was NOTHING in English and very little people around us 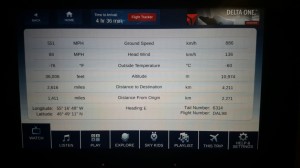 1/3 of the way through our plane ride

who spoke English. We played everything from here on by ear and impulse. We had to guess what train we were on and guess what stops to get off at judging only by the very few Italian words that we had learned. Nonetheless, we had made it to Pontedera and made the very last bus to Volterra with but minutes to spare. Overall, Sam and I encountered Three Airports, Two Planes, Two Bus Terminals, Two Train Stations, and a lovely 26 Hours of traveling with no sleep; We had made it to Volterra though and lets just say that this view alone is worth it all. 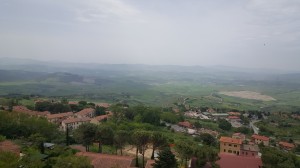