When you arrive in Volterra, Piazza Martiri della Liberta is likely to be the first place you see. There, your senses will be immediately awarded with the most magnificent panorama of Tuscany. Over the curving parapet wall you will be looking down across a wide valley, filled with rolling Tuscan hills. Depending on the time of the day, the season and weather, the view and the colors will be very different. From lush green of spring, gradually replaced with gold and brown of the summer and fall, all the way to the subtle patches of frost or even snow during the winter. Tuscan villas mark the endpoints of the dirt roads dotted with countless cypresses, which are like exclamation points marching up and down the hills, without the sentence, but with a beautiful conclusion. The villas occupy the tops of some hills, while the dark shadows of the trees fill deep ravines between them. The houses viewed from the distance are in perfect harmony with the colors of nature. They were all built from local materials; despite their man-made forms they appear to be the most natural part of the landscape. Even their terracotta roofs are blending in, weathered by the tireless wind.

Occasionally, you can’t see the landscape at all. On these days Volterra rises above the clouds, bathes in sunshine while the world below is shrouded in mist. Such a view is a very special and a rare reward for a visit to Volterra outside of the normal tourist season. I always wished I could take a picture of the city from outside in such weather, floating above the clouds, but with everything else around covered with the mist there is obviously no good vantage point to take such photo. 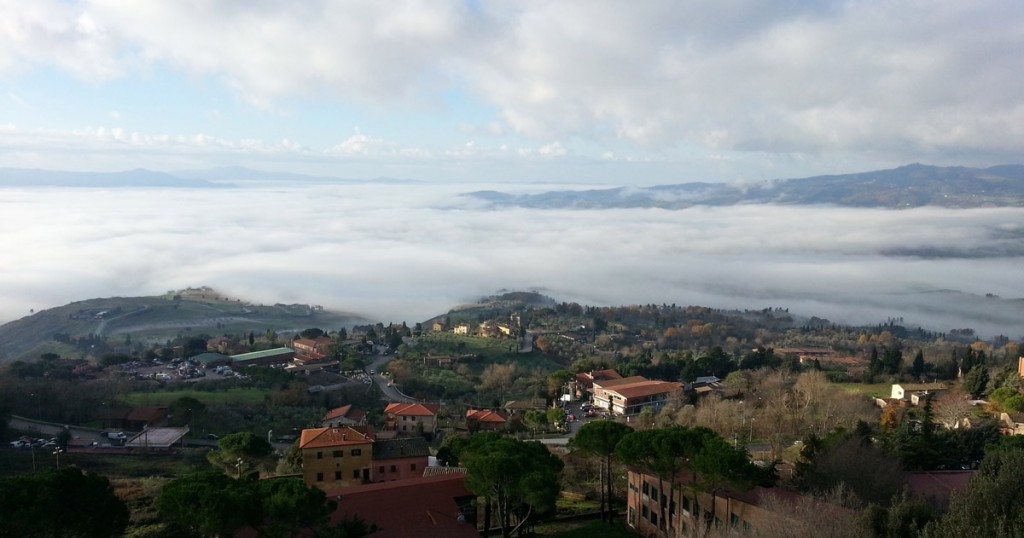 Your eye will seize it all at once in the panorama in front of you, and then indulge in the details. It will follow the silvery road towards Saline di Volterra as it winds down the hill reflecting late afternoon sun. It will note the presence of the subtle marks of modernity: the wind turbines over Montecatini val di Cecina and the cooling towers of Larderello, the geothermic power plant. If you are lucky, in the opening between the hills on the opposite side of the valley you will get a glimpse of the Tyrrhenian Sea glimmering in the sunlight. On a really clear day you will hopefully see a dark shadow of a mountain range on the horizon, above the sea line. This is the northern part of the island of Corsica, at a distance of 130 kilometers. And when you look to your right, along the imposing city walls, in the opening between the mountains, you should see the city of Pisa. Behind it, another view of the sea. The view from over the edge of the Piazza is so enchanting that you are likely to lose a sense of where you are. There, at Le Ponti you really feel like you are at the top of the world. 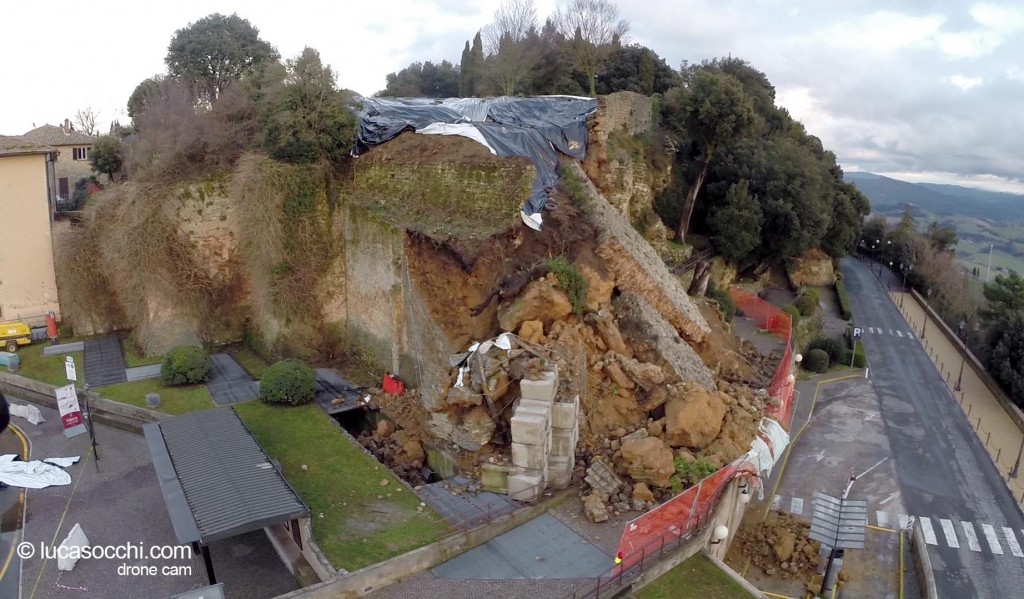 The wall collapse at the entrance to the Le Ponti- no vehicular or pedestrian traffic is now allowed in the piazza for security reasons.