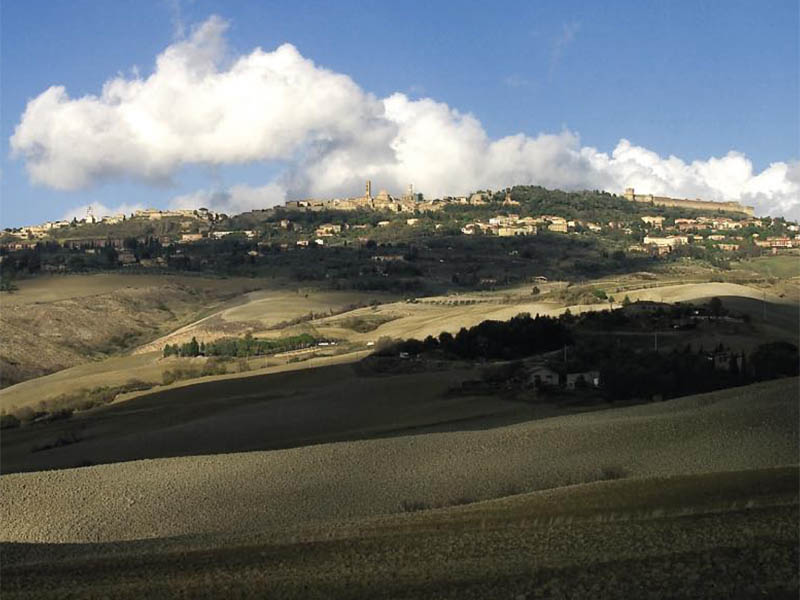 Many guide books refer to Volterra as one of the hidden treasures of Tuscany and Italy. They couldn’t be more wrong. Volterra is not hidden by the longest stretch of imagination. It is occupying proudly the highest hill between the valleys of the rivers Cecina and Era. It has been there, under different versions of the same name, for close to three thousand years. A natural defensive position, with fresh water and abundant farming opportunities, it was obviously favored by early civilizations of the Apennine peninsula. Once a proud Etruscan city, it was also one of the first independent city-states in the medieval Italy, a Comune. Palazzo dei Priori, the city hall, was the first one in Tuscany. It was the seat and a symbol of the new form of self-governance of the city. Today it is not making the impression of being the richest or the most decorative comparing to Florence or Siena, but it was the original model upon which all other designs advanced. The Etruscan confederation was made up of twelve cities, governed by industry, trade and joy of life. Roman dominance of Etruria was finalized in 283 BC; Volterra was one of the last of the original twelve cities to surrender to the new power. It changed everything for Volterra. Soon new roads became the bloodstream of the world. Via Aurelia was built along the western coast, and Via Cassia was cutting through the center of the peninsula. They both bypassed Volterra, heading for the new, more important centers of administration and commerce, Pisae and Florentia. When Florence was founded as a military camp in 59 BC, Volterra existed already for at least 600 years. And yet since it has been dominated by the Romans, until now, the city has had the same problem: the road system and transport always favor easy terrain; Volterra is connected with the rest of the world by some of the most picturesque, but not necessarily most convenient roads in Tuscany.