Recently Volterra has been rather touristy and very active on the weekends. Some events have started to kick off the Medieval Theme that will carry on and lead up to the annual Volterra Medieval Festival in August. Two such events are the Crossbow Tournament and Flag Tossing. Flag Tossing is a skill that seems to take years to perfect; this is due to the skill and nature that is displayed to perform flag tossing. An individual will consistently juggle, flip, spin, and toss flags to heights of 30 feet in the air, all while maintaining a professional attitude and upbeat footwork. Some of the “Flag Tossers” had the ability to keep six flags in motion at once, creating a mesmerising performance that if you blinked you would miss something. Flag Tossing, however, was not the main event.

The main event took place as the Eight Contrades of Volterra competed in a crossbow tournament. The tournament was made up of two rounds. First, each Contrada would have 2-3 Archers compete to represent them. Second, once each Contrada had a champion the Archers would then compete in a one shot wins all tournament. This ultimately decided the winner based on who came closest to the center of the target.

Some background about the Volterran crossbow team. If the flier passed out was translated correctly the Team has a significant role as a prominent Archery team throughout Italy. This has been proven as they have been crowned gold medalists Two Times in the countries competition and consistently have placed amongst the top three teams over the past few years.

Enough of history though let’s see the words in action! 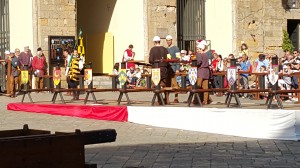 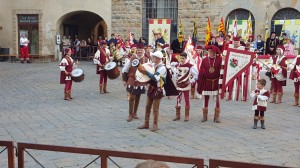 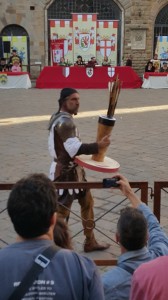 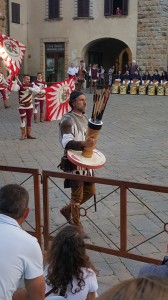 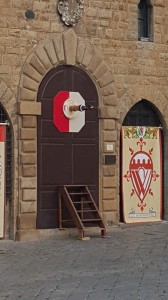 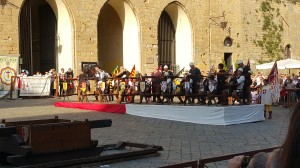 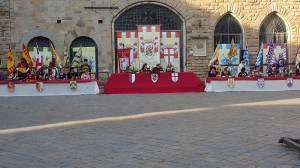 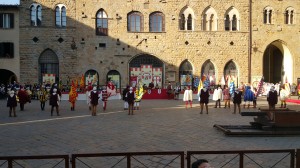 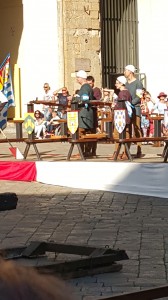