We made it! It took some groups a bit longer than others, but we all eventually made it to Volterra one way or another.

Group one (John, Maddie, Dakota, Aly, Sumer, + me) flew into Rome. Our first delay happened when Aly thought she lost her phone in the airport. She didn’t though. Our second delay happened when we thought we could meet Odette at the train station in Rome. We waited two hours for the next train to make sure she had time to get the train station… she did not get there in time though, so after waiting we had to leave without her. Don’t worry though, she ended up getting a cab and beating everyone. Delay number three happened on the train to Florence when the train had a 70 minute delay. The train from Florence to Pontedera went pretty smoothly, with the exception of  a lady who projectile vomited a little to close too our luggage. We were all very happy to get off that train. When we stepped onto the platform, we saw Deven standing across the tracks on another platform so we added him to our group. I am sure he now regrets this somewhat, as we took the wrong bus in Pontedera, which delayed us about another four hours. We also were not allowed to store our luggage underneath the bus, which means we had to bring it all on with us. Have you tried to wrangle and contain 15 suitcases on a bus? (Pro tip: do not leave the luggage unattended. It will go flying and the other people on the bus will get mad. The bus driver will act like nothing happened though.) As I mentioned before, this was the wrong bus, so the bus driver dropped us off at another bus station and said a bus was coming that would take us to Volterra. That was a lie though. We waited three hours at this bus station, and eventually Guilia saved us and got a mini-bus to pick us up. 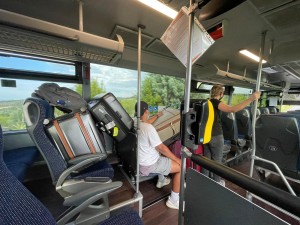 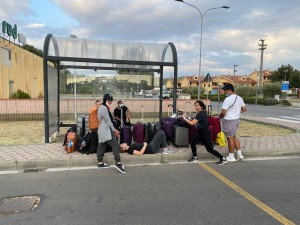 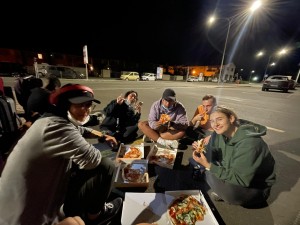 Group two consisted of Natalie and Nyvey. They flew into Milan and had to take a similar amount of shuttles, trains, and buses. While they did not get delayed at every turn, they were harassed by a guy at the train station who gave them a sob story on why he needed their money. When they told him no, he walked away with some choice words. It was not a super nice welcome into Italy… that’s for sure. After that though, it was thankfully smooth sailing.

Group three (Neteya and Jahlil) flew from Toronto and landed in Rome. They did not seem to have any issues or memorable moments, other than their first flight getting canceled. 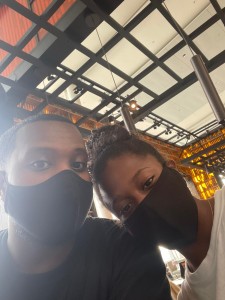