A Day Trip to Livorno 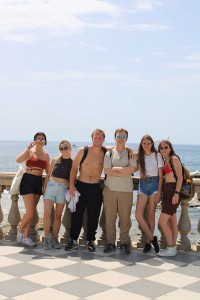 Enjoying the promenade of Livorno

A group of students, including myself, had the opportunity recently to visit Livorno. Livorno is a port city on the west coast of Tuscany, known for its harbor and renaissance-era architecture. Less known by tourists like cities such as Pisa, Siena, and the likes, Livorno offers a slice of Tuscan life free from the tourist infrastructure that at times bogs down the cities that were just mentioned.

With its beautiful blue sky and colorful renaissance-style architecture, Livorno is truly a sight to see. Thankfully the town doesn’t disappoint on the modern architecture front either with handsomely proportioned buildings living amongst the older structures of the city. The harbor also adds visual interest to the urban fabric. The brightly colored structures, ships, and equipment of the harbor beautifully contrast with the crisp water and sky. Livorno also has an element of surrealism in its composition, especially along the coast. The city’s checkerboard promenade feels unreal, appearing more like early CGI films than any space we were familiar with. This was not helped by the fact that we were the only people walking on the promenade, making it feel as if we were not supposed to be there as well. The ornamentation of Livorno felt surreal as well. The details at times were so shallow, that they appeared painted on. On that point, some of them were painted on. The surrealism of Livorno only adds to its appeal. While the architecture of the city isn’t worthy of critical admiration and reverence in the same way as Florence, It’s an interesting experience.

Enough about architecture, we went to Livorno expecting to find a beach. Upon arrival, we quickly learned that the beaches the city had to offer were either located on expensive resorts or nothing but rocks. Thankfully we found a pier that had been converted into a concrete beach of sorts. It was honestly a blast spending some time on the pier enjoying the cold water on a hot summer day.

To leave off, Although our trip to Livorno was a spur-of-the-moment trip, it still offered a lot of enjoyment far beyond anticipation. For those who have never been, I thoroughly recommend checking it out, you’ll be surprised. 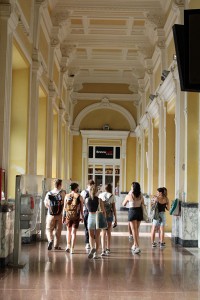 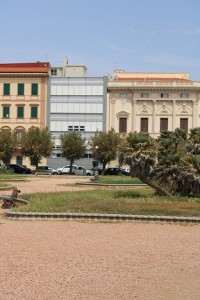 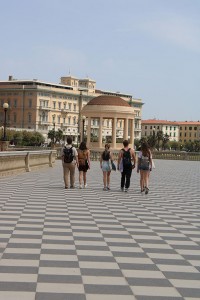 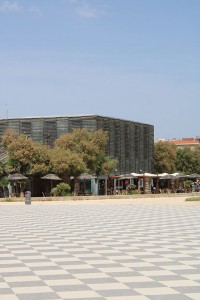