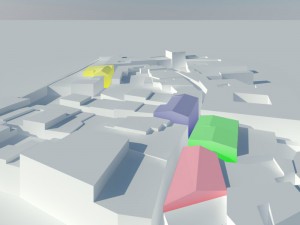 A massing map showing noble Palaces within the area of study. 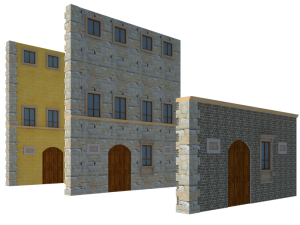 A visual representation of how the facade of Palazzo de Campani may have changed over the years.

Within these groups, students were to fully understand the history and evolution of such subjects. This resulted in a 3km walk downhill to the City of Volterra archives.(Feature Image is the route taken). Inside the archives, students were challenged with finding information that allowed them to make educated conclusions based on their specific subjects. This was specifically a challenge for the University of Detroit Mercy Students as all of the information/pamphlets/articles/books were written in Italian and had to be translated. Some students from the University of Pisa could speak English, but a lot of information was lost in translation creating a challenge for both groups of students. Aside from the visit to the Volterra archives the students also did a bulk of their research in the city library. At the end of the week, the five groups presented information and research of their specific subject. While the majority of the research was done by the University of Pisa Students, the students from the University of Detroit Mercy worked to create maps and interpretive graphics 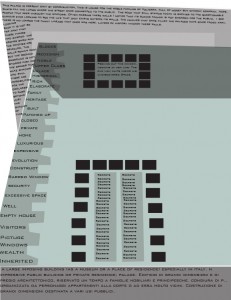 Sarah Black’s interpretation of the palace de Campani. Showing an abstraction of all its secrets and history.

to support the research being presented. Overall, it was a very valuable experience that had both student groups learn a bit more about each others culture, language, and history of Volterra.